You may recall that a couple of years ago we mentioned Bolivar, a graphic novel written and illustrated by Sean Rubin. Still no word on that rumored animated film adaptation, but we did find out the human girl Sybil and her dinosaur friend Bolivar have returned in a sequel book, Bolivar Eats New York. Good grief, all of it?  Well no… “When Sybil learns that Bolivar only likes corned beef sandwiches, she informs him that he’s been missing out on one of the great attributes of New York City and it’s rich communities–delicacies from around the world! Knishes! Falafel! Dim Sum! And it wouldn’t be a story in the Big Apple without pizza . . . Explore the five boroughs: Brooklyn, Queens, Bronx, Staten Island, and Manhattan in this lushly illustrated Discovery Adventure

from Eisner-nominated writer and artist Sean Rubin where kids and parents alike search for their favorite foods, and find other sights unique to one of the greatest cities in the world!” Visit the author’s web site and find out more. 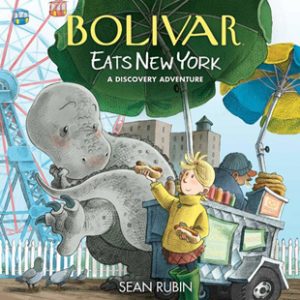