We discovered this through Upworthy.com: “Greg Sullivan says he never intended to publish his first book, Gregory Dragon Is Just The Same. It was around his son’s fifth birthday and the Los Angeles-based writer and artist wanted to create something unique for his son’s special day. At the time, his young child was going through a challenge familiar to most other kids around his age: wanting to fit in with his classmates… Sullivan wanted to create something that would help his son “…not only embrace his unique characteristics but to celebrate them.” And it just so happened that his son loves dragons. As an award-winning artist, animator, screenwriter and novelist, it made sense for Sullivan to put his professional skills toward something creative and practical for his son’s development. Gregory Dragon Is Just The Same switches up the traditional children’s book narrative. Instead having an omniscient voice making broad proclamations to a younger audience, he allows the young dragon character to take the lead: “Gregory Dragon is just like all the other dragons, or so the narrator says. But Gregory Dragon disagrees and refuses to let the story be told until he’s had his say.” Find out just what he has to say over at Amazon. 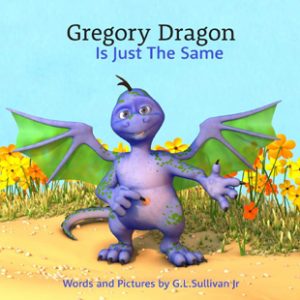