Oh, the Gryphons and the Wyverns Should Be Friends…

It goes without saying perhaps: One of the “casualties” of conventions and conferences being canceled or postponed left and right is vendors who had made big plans to sell product at those events. Here’s one — John Bailey has a new novel out, the first in his Feathers & Flames series, called Dire. “Euraiya is a lazy gryphon, content to let her traps hunt for her. Roving thieves and bullish curs are her only concerns. But after she fails to save her home from a far greater threat, her world erupts into flames. Broken and half dead, she must claw her way to find a place within a new pride that’s poised to exile her with one wrong move. Forced to prove her worth, her warnings are silenced. But with the leaders distracted and a rogue lord poised to take advantage of any weakness, Euraiya must confront them and herself before it’s too late. Can Euraiya save what’s left of her future before the fires rain down again? Dire is the first novel in a new creature fiction fantasy series that pits gryphons against wyverns in a battle for land and survival.” The author was all set to make a book-signing tour of various furry conventions, but now that’s not happening. Find the book over at Amazon, and see if you can help out a creative writer! 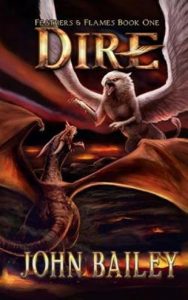