His Hands Are Wet Because He Washes Them

Well it’s about time — and you knew this was coming. Back in December Marvel Comics started a brand-new Spider-Ham comic series, dovetailing off his new-found fame thanks to Into The Spiderverse. “Not a dream! Not a hoax! Not an imaginary tail! Spider-Ham finally has his own series! (Again!) Peter Porker, the Spectacular Spider-Ham finds himself jumping through time, side-by-side with Peter Parker, the Spectacular Spider-Man! Zeb Wells and Will Robson bring you the Ham and Man story you’ve been waiting for!” Order it now. 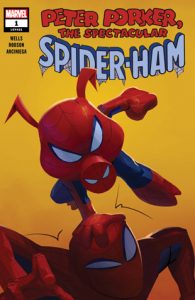