Recently Jake S. Friedman (author, researcher, and professor of art and animation, according to his web site) brought us his new book The Disney Afternoon: The Making of Television Renaissance. “When the Disney Afternoon premiered in 1990, kids tossed their backpacks aside to watch their favorite Disney television characters. Unlike with feature films, these stars had a new adventure every weekday, and their audience journeyed with them on a daily basis. Throughout the ’80s and ’90s, Disney raised the bar with a lineup of innovative, high-quality television animation. The characters were endearing, the writing was clever, and the art was exceptional. Those who grew up with these characters have continued their love affairs for shows like Darkwing Duck, Gargoyles, TaleSpin, and the irrepressibly beloved DuckTales, deep into adulthood. For the first time, learn the history of the Disney Afternoon shows, read interviews from the creative teams, and revel in rare, behind-the-scenes artwork, plus get the full making of story of the modern-day DuckTales series and its legacy connections to the past.” It’s available now in hardcover from Disney Editions. Order it from the author’s store — and check out his other titles. 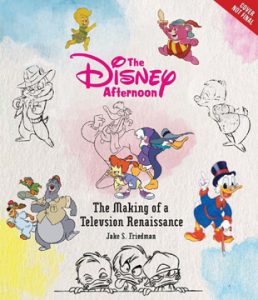