Rage on the Page

Likely you’ve heard of the Ursa Major Award-winning anime called Aggretsuko, yes? Did you know that Oni Press recently started a full-color comic book version? Neither did we! “Sanrio and Oni Press join forces to bring Aggretsuko to comics for the first time! Aggretsuko, the hit Netflix show in production for season three, stars Retsuko the Red Panda, a young office worker stuck in a thankless job, whose only stress release is singing heavy metal at the local karaoke joint. With the help of her friends, can she ever find the job satisfaction she craves – – not to mention adventure, the approval of her mother, and even… love?!” It’s written by Daniel Barnes, and illustrated by DJ Kirkland and Sarah Stern. Take a look at Oni’s page — and some creepy alternate covers! 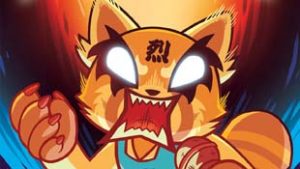