Eh? Sorry? What Was That?

Dragon Whisperer is a new full-color comic miniseries from Red 5 Comics. “In a world of clockwork and steam, cursed airship captain, Alexander Faulk, endures his centuries-long quest for an end to his torment: A Dragon! His ceaseless pursuit bears scarce reward, that is until Faulk discovers the bridge between the world of man, and the world of monsters. Her name is Rosalinda Eberhardt, and she is the Dragon Whisperer.” Written by Alex Deluca and illustrated Glen Fernandez, issues should be available now as comic stores slowly re-open. 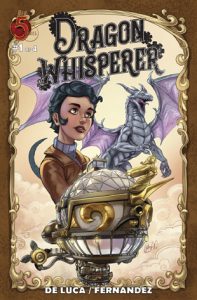