How Pulp Can You GET?

Here’s an “offered again” item that slipped right by us the first time around: Kyrra, Alien Jungle Girl. “Left for dead on an alien planet, Kyrra was taken in and raised by a primitive tribe of demon apes. She has no memory of her previous life and has assimilated to the ways of her adopted family, yet she still looks to the stars and wonders… Where did she come from? What’s out there for her? On her 16th birthday she gets a clue to her origins and sets out for an adventure that will take her beyond the Alien Jungle Girl she knows.” Dark Horse Press collected the original comic series (written by Rich Woodall and illustrated by Craig Rousseau) together in one trade paperback graphic novel, which is available now. 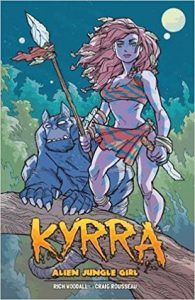