Roaring Out Of South Africa

According to the Wikipedia page, Jungle Beat is a CGI animated TV series out of South Africa, featuring the dialogue-free adventures and antics of various African animals. Later, the series was expanded into the adventures of Munki and Trunk. (No prizes for guessing what species they are…) Well now this year Munki and Trunk are on their way in their own feature film as Sunrise Productions presents Jungle Beat: The Movie. “One morning, the animals of the jungle wake up to discover that they can speak. They’re even more amazed when they learn the reason why: There’s an alien in the jungle! Little Fneep has come to conquer the planet and has brought some crazy tech with him, including a translation device that lets them talk for the first time. Unfortunately for the intergalactic Scaldronian empire, but fortunately for the jungle, Fneep is a terrible conqueror: He’s homesick, he’s crashed his ship, and he’s no match for the antics of Munki, Trunk, and the gang.” Keep your eyes open: The producers are planning a world-wide on-line release party at the end of this month. 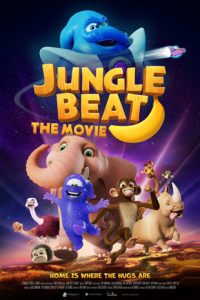