There Are Worse Ways To Go…

Let’s face it: Furry fans are going to notice a manga with a title like Reborn As A Polar Bear (aka The Legend of How I Became a Forest Guardian). Check out this description: “After devoted mountain climber Kumakichi Kumada falls into a ravine, he wakes up in the middle of a forest in another world… as a polar bear! Now this tough Ursus maritimus is looking after six werewolf sisters on the run from the humans tyrannizing their clan. Keeping his wits about him and using his knowledge from his past life, the next ‘mountain’ for him to climb will be making a comfortable life in the forest for everyone!” It’s written in by Chihiro Mishima, and illustrated in black & white (with some color pages) by Houki Kusano and Kururi. Take a look over at Yen Press. 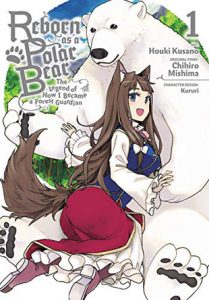