Return of a Classic Werewolf

Werewolf By Night is a legendary horror comic from one of Marvel’s golden ages, the late 1970’s. Now it has returned in a new incarnation, this time written by Taboo (of the band Black Eyed Peas) and Benjamin Jackendoff. From Marvel’s web site: “The pair previously worked together on a story for Marvel Comics #1000 that focused on Red Wolf and will now be teaming up with acclaimed comic artist Scott Eaton on Werewolf By Night. The series will introduce a brand-new character to the Marvel Universe in a story set in Arizona. The new Werewolf will be a young man named Jake who will be dealing with the effects of a family curse while trying to protect his people. The events of the story will also be driven by the outcome of March’s Outlawed one-shot.” Issues of this 4-issue miniseries are on the shelves now. 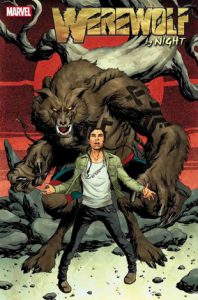