Back in the day Marvel Comics started up a special imprint called Star Comics, intended for younger readers. One of the premier titles on that line was a Richie Rich-style funny animal comic called The Secret Life of Top Dog. Well now, Marvel have collected 14 issues of Top Dog together in one paperback, Star Comics: Top Dog — The Complete Collection, Volume 1. “Discover the secret life of Top Dog, the world’s smartest, funniest – and talking-est – dog! That’s right, Top Dog can talk…but don’t tell anyone! One of the biggest names in Marvel’s 1980s Star Comics imprint, Top Dog and his best pal, Joey Jordan, shared hair-raising and hilarious adventures together – and now you can relive them all! When Mervin Megabucks, the richest, meanest kid in town, discovers what Top Dog is capable of, he sets out to dog-nap him! Our clever canine is accused of being a foreign spy and put behind bars – but what is the truth about Top Dog’s past, and what will that mean for his and Joey’s future?” Take note: According to Amazon, publication has been held up until this fall. 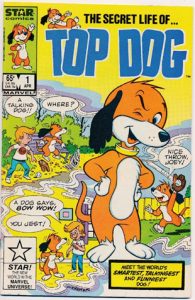