If you thought you couldn’t get away from that song before… check out what we just found on Animation World Network: Nickelodeon is expanding the underwater world of Baby Shark with the greenlight of a new animated preschool series, Baby Shark’s Big Show! (working title), based on the world-famous pop culture phenomenon. Co-produced by Nickelodeon Animation Studio and SmartStudy, the 2D-animated series (26 half-hour episodes) will follow Baby Shark and his best friend William as they journey on fun-filled comedic adventures in their community of Carnivore Cove, meet new friends and sing original catchy tunes along the way… Baby Shark’s Big Show! will debut with an all-new original holiday special this December, with premieres rolling out across Nickelodeon’s preschool platforms in spring 2021. Following the U.S. launch, the series will roll out on Nickelodeon and Nick Jr. channels internationally… Baby Shark launched on YouTube in November 2015 and amassed 5.7 billion views, becoming the second most-watched video in the platform’s history.” Just in case you needed to be reminded of that. 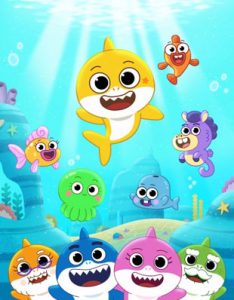