Free from the Zoo to You

If you haven’t heard yet: Free Comic Book Day is on this year — but in a different way. Now it’s Free Comic Book Summer, where the samplers will be passed out in batches over several weeks, rather than all at once, as a way to prevent crowding at comic book stores. And here’s one we found right off the bat… Brett Bean is an illustrator and character designer who is a “frequent face” at comic book convention artist alleys. Well now he’s come out with his own series of full-color graphic novels called Zoo Patrol Squad. “The lion has gone missing? The king cobra has vanished? Sounds like a job for the Zoo Patrol Squad! Timid Fennlock Fox and outgoing Penny the Pig team up for their first adventure as they look for clues to track down the missing animals in their usually peaceful zoo.” The free Zoo Patrol Squad sampler is available now at a comic shop near you (wear a mask and visit safely!) and the first graphic novel in the series, Kingdom Caper, is available for order on line. Oh, and visit Brett’s web site to see more of what he’s worked on too. 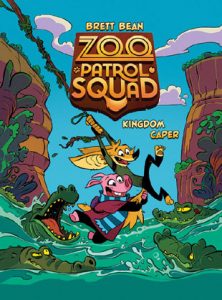