In the about-damn-time department, word is spreading fast that Stan Sakai’s iconic furry comic Usagi Yojimbo is being adapted into a new animated TV series for Netflix of all places… but, with a twist. Here’s how Comics Beat put it: “Variety reports that Netflix and Gaumont Animation are teaming to create a CGI animated series based on the character. The series will be executive produced by Sakai, titled Samurai Rabbit: The Usagi Chronicles, along with a handful of others including Mike Richardson of Dark Horse Entertainment and James Wan. According to Variety, the series won’t be a straight adaptation of Sakai’s Usagi Yojimbo series, but will use the comics as lore for a series set in the far future. The story will follow Rabbit Samurai Yuichi, a descendant of Miyamoto Usagi, and ‘a ragtag team of misfit heroes’ who accompany him on his quest to live up to his ancestor’s legacy.” Stay tooned for more news about a release date. 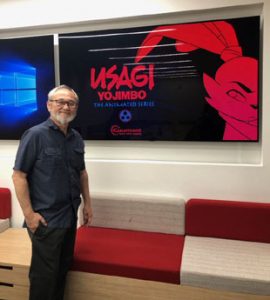