Tiger’s On His Way

Just over a year ago we mentioned that Laurence Yep’s popular fantasy novel The Tiger’s Apprentice would be on its way to movie screens in 2022. Well now thanks to AWN we have an update: “Time to brush up on your Chinese Zodiac! Hunky Henry Golding (Crazy Rich Asians, Last Christmas) is set to lend his vocal talents to his first ever voice acting gig as the shape-shifting tiger, Mr. Hu, in Paramount Animation’s feature film adaptation of Laurence Yep’s 2003 best-selling children’s book, The Tiger’s Apprentice. The film marks the feature directing debut for Carlos Baena, a former Pixar animator known for his work on Wall-E and Toy Story 3, as well as his award winning 2019 animated short, La Noria… The Tiger’s Apprentice, book one in a trilogy of the same name, follows Tom, a young boy living in San Francisco. The real world and one of magic collide when Tom meets Mr. Hu, a talking tiger who mentors the child in the art of mystical protection against evil.” No word yet on any changes to the date, so hopefully we can still look forward to it on February 11th, year after next. 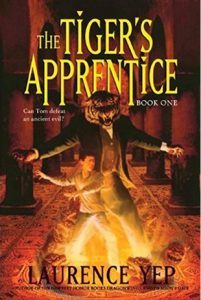