Xira is a new full-color science fiction comic series written by Mauro Mantella, with art by Diego Giribaldi. Check it out over at Bleeding Cool: “Xira has been experimented on her entire life to help mankind create the perfect astronaut, making her smarter, faster, stronger. When Xira is allowed to have a baby who will also be experimented on Xira has had enough and will do whatever it takes to get herself and her child to freedom.” The first issue should be comic to comic book stores soon from Red 5 Comics. 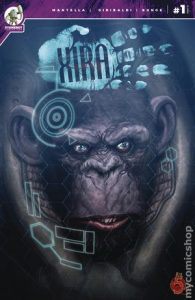