After bouncing around and looking for distribution for literally years, we finally have a release date for the new CGI animated feature Animal Crackers, directed by Scott Christian Sava and animation veteran Tony Bancroft (Mulan). The film is being released this Friday, July 24th on Netflix (of course!). Animation Scoop has an extensive interview with the directors about their efforts to get the film made, and out to the world. We’ll say this at least: The new trailer looks better than what we’ve seen before. See what you think this Friday. 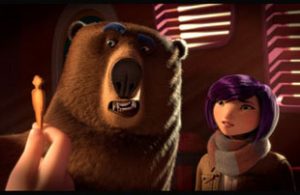