Remember the comic series Franklin and Ghost from last year? Well now from the same universe — and the busy busy mind of writer/creator Garrett Gunn — comes the new one-shot Warcorns: Combat Unicorns For Hire. Now there’s a title you’re gonna notice! Here’s what they say in Previews: “After having successfully evaded two complete dispatches of Retrieval Bots from Defilion, Franklin and Ghost are sent by their female accomplice, Delilah, to retrieve a rare weapon that is instrumental to the destruction of Defilion. Warcorns Special Forces Group Alpha is dispatched, at the behest of General Erich Badguey, to intercept Franklin and Ghost and return them to Defilion dead or alive.” Illustrated by Kevin Stokes and Nicolas Touris, Warcorns should be available at comic book stores and sites any time now. 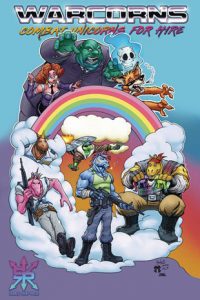