The Senses of a Dog

Here’s an interesting new hardcover graphic novel from Boom! Studios. Simply called Bear, it’s actually based on scientific research into the brains of animals.  “Bear is a service dog who would do anything for his owner and best friend Patrick who is blind. But when Bear suddenly loses his vision, he worries he’s lost his purpose in life—protecting Patrick! Following the misguided advice from some self-serving raccoons, Bear embarks on a transformative journey to regain his eyesight. Out of both necessity and survival, he learns to tap into his other senses and begins to see the world from a new perspective that is at times more rich and colorful than the world he’s always known.” Written by Ben Queen (Disney/Pixar’s Cars 2 and Cars 3) and illustrated by Joe Todd-Stanton (A Mouse Called Julian), Bear is available now from Simon & Schuster. 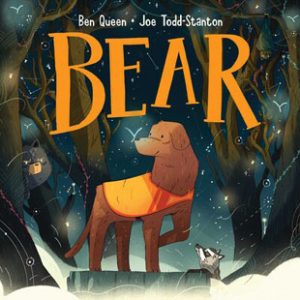