Spikey and the Squirrel

Talk about coming out of nowhere — and here it is! Animation Magazine let us know about a new animated film called Latte & The Magic Waterstone. Created in Germany and Belgium, it just premiered on Netflix in North America. “Directed by Regina Welker and Nina Wels, the children’s film is based on a book by Sebastian Lybeck and follows the adventures of a hedgehog named Latte and his anxious squirrel friend Tjum, who set out to reclaim a magic stone stolen by the bear king.” Animation has an interview with the directors, and the official trailer. 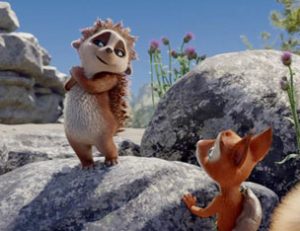