Return of the Protoplasm

You know your animation is getting attention when no less than CNN has to mention it. And this is for a reboot! “Happy, happy, joy, joy, we are getting a new version of The Ren & Stimpy Show. Comedy Central announced on Wednesday that it is reimagining the 1990s cult animated series. ‘We are excited to reinvent this iconic franchise with a new creative team and our partners at the Nickelodeon Animation Studio,’ Chris McCarthy, president of Viacom CBS Entertainment & Youth Group, said in a statement.’Ren & Stimpy joins our rapidly expanding roster of adult animation including South Park, Beavis and Butt-Head, and Clone High as we continue to reimagine our treasure chest of beloved IP for new generations.’ No date has been announced for the new show’s debut.” Also no word if the current production crew will include original creator John Kricfalusi. 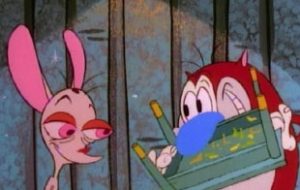