We try to keep on top of things here, so we thought we should update the latest Teenage Mutant Ninja Turtle news for those of you who follow them. Remember The Last Ronin, the newest TMNT comic miniseries? Well according to Bleeding Cool, there have been some last minute changes to the upcoming release. “Esau Escorza and Isaac Escorza, best known for their work on Tarna for Heavy Metal, are now joining the art team with Kevin Eastman, but Andy Kuhn is no longer listed on the creative team. Apparently, this stems from poor retailer reaction to The Last Ronin preview, and a new sampler is in the works.” Also, the release date has been pushed back again to the end of October. An interesting side note: The original script for The Last Ronin, written by Eastman and Laird in 1987, set the action in the far future — of the year 2017. Obviously, that needed to change! 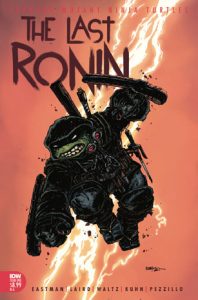