ET On Your TV

We just found out about Earth To Ned, the new science fiction TV series from the Muppet folks at The Jim Henson Company. “The galaxy’s first alien-hosted talk show” will start streaming on Disney + starting September 4th. “Produced by The Jim Henson Company and Marwar Junction Productions, Earth to Ned is a decidedly different take on the late-night talk format. It stars extraterrestrial-creatures Ned and Cornelius as they interview terrestrial stars. Each episode focuses on a topic or theme that is unique to Earthlings and fascinating to Ned, including comedy, sports, social media and fashion. Ned beams in celebrity guests from across the known universe, and the more he learns about our human culture, the more obsessed he becomes.” Take a look at the review on Deadline, and check out the trailer video there or on YouTube. 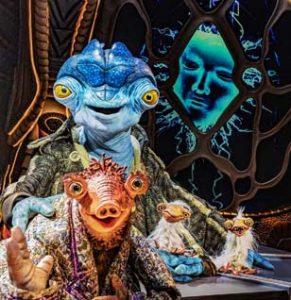