It seems like things never stop moving in the world of Teenage Mutant Ninja Turtles.  Now the latest turtle, Jennika, has been granted a second comic miniseries — and it’s coming soon. Here’s the press release from IDW: “Due to overwhelming demand, the female breakout character of IDW Publishing’s Teenage Mutant Ninja Turtles, Jennika, will return in a second solo adventure! Brahm Revel returns as writer-artist to kick off the first of two story arcs driving Teenage Mutant Ninja Turtles: Jennika II, a six-issue miniseries debuting in November. While the first Jennika miniseries found the heroine still trying to acclimate to life as a mutant, the new story thrusts her into the dangerous underworld of Mutant Town, where mutants are turning into monsters and fear spreads rampant. There’s conspiracy afoot, and only Jennika can navigate the deepening divides of her new home to root out an evil conspiracy.” Comic Book Resources has an extensive interview with the creative team. Is this something Furry Fans might like? Check out that cover! 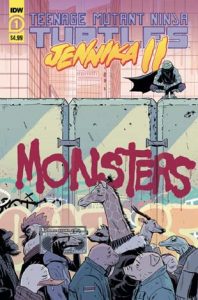