There is much excitement over at Animation World Network about the upcoming We Bare Bears: The Movie. “Cartoon Network will stage its biggest multi-platform movie premiere ever on September 12, debuting We Bare Bears: The Movie across eight WarnerMedia channels and apps in Asia Pacific, including Cartoon Network, Boomerang, HBO, HBO Family, Warner TV, as well as Korean channel Oh!K, which is also screening last year’s famous K-pop episode starring boy-band MONSTA X… In the run-up to the movie release, a three-week on-channel stunt with We Bare Bears episodes will see the spotlight fall on one bear a week; specially-curated episodes will celebrate the unique story, origin, and qualities of the furry trio.” As for the movie itself, it goes like this: “Life is good for this lovable trio. But when their love of food trucks and viral videos get out of hand, it catches the attention of the menacing Agent Trout from the National Wildlife Control, who pledges to restore the “natural order” by separating them forever. Chased from their home, Grizz decides there’s only one thing they can do to find refuge: move to Canada! The Bears embark on an epic road-trip filled with new friends, dangerous obstacles, and massive parties. But most importantly, the perilous journey will force the Bears to face how they first met and became brothers, to keep their family from splitting apart.” There’s a trailer at AWN, too. 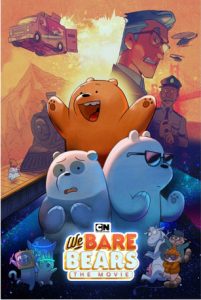