Find Friends Where You Can

It’s not news that anthropomorphic characters don’t get to be the leads in many stories — but it’s those non-human secondary characters that make the story interesting. On that note, check out Timo the Adventurer.  It’s a new black & white graphic novel written by Jonathan Garnier, illustrated by Yohan Sacre, and imported by Houghton Mifflin Harcourt. “Having read every book in his tiny village, young Timo decides it is time to leave home and become a hero. And while that is easier said than done, Timo is determined to succeed. When he rescues an enchanted beast named Broof, Timo gains a gruff and reluctant ally. But little does good-hearted Timo suspect that Broof’s mysterious past will bring complications to his journey…. An engaging hero, surprising plot twists, and a host of fantastical creatures keep readers turning the pages of this spelling-binding fantasy.” It’s out now in hardcover and paperback versions. 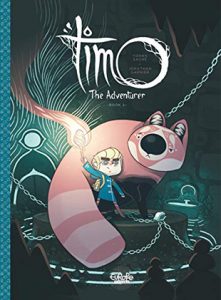