Arctic Dogs (2019) didn’t exactly blow up the box office or impress the critics much. (Ye EdOtter is still trying to figure out how the planned action-adventure film Arctic Justice: Thunder Squad morphed into this silly comedy…) Apparently though, Arctic Dogs has been very popular on Netflix — enough so that a spin-off series of animated shorts called Arctic Friends has been created. According to Animation Magazine: “Arctic Friends follows the exciting adventures of Swifty, the arctic fox who has finally achieved his dream job: Be the best delivery dog at Arctic Blast Delivery Service. With the help of his best friend PB the polar bear, Jade the red fox, and the ABDS team, this crew is ready to deliver at any cost! Constantly thwarted by the nefarious mastermind Otto Van Walrus and his mischievous puffins, Swifty must outsmart these villains to ensure that all packages are delivered to their rightful recipients.” The series recently premiered on Apple TV and Amazon Prime Video. 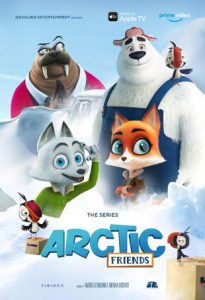