Wild Animals… in a Mall

So we found out about Wild Life, a new animated TV series coming to SYFY’s TZGZ lineup on September 26th. Animation Scoop put it like this: “It’s an adult, post-apocalyptic, talking animal, animated comedy… or as it’s been called by the creative team, “It’s like if The Walking Dead smoked a bunch of Adventure Time and binge-watched Friends.”” Wow, that’s a lot to take in. AS has an interview with series creator Adam Davies and his mates. 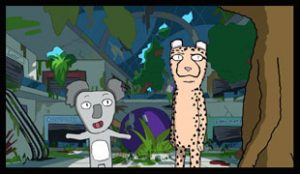