Previews let us know about Lupina, the new full-color graphic novel from Legendary Comics, written by James F. Wright and illustrated by Liana Buszka. “In the coastal town of Kote, recently brought under the yoke of the Addalian Empire, four-year-old Lupa spends her days getting bullied by her older sister and hiding behind her mother’s skirts. But when tragedy strikes, Lupa finds herself alone in a new world… alone until she’s found by the she-wolf, Coras, and sets off on a journey of discovery… and revenge.” It’s been serialized, but now it’s collected together in one place. Bleeding Cool has a preview from last year. 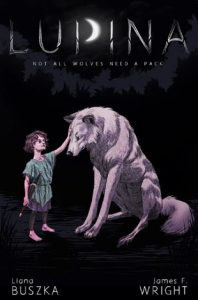