Wow! Recently we were contacted by Devon McBride-Wilson, creator of Firewake. Here’s what he had to say: “Rabbit Valley continues to expand its equine portfolio as the second issue of Firewake has gone up for preorder. This comic series follows the down-to-earth veteran detective Firewake and his cocky rookie partner Zaffa as they investigate and pursue the unstable criminal mastermind Sable Nox. Issue 2, Questions, sees Zaffa get closer to Firewake’s niece as he confronts mobsters at the restaurant she waitresses at, while Firewake himself meets the mysterious biomancer mare Fancyber, who says she has information for him.” We like what we’ve seen — and we’ll let the creator explain why. “While Firewake is safe for readers 10 and up, its gritty atmosphere, semi-procedural style and fantastic action break new ground for equine stories. Influences from My Little Pony are mixed with elements from CSI and Batman, and if you’re a fan of those, this is definitely worth checking out.” What he said! 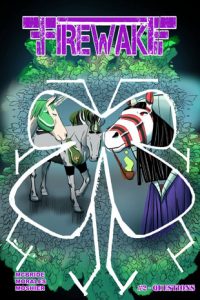