This Pig Gets His… Animal

A recent article at Animation World Network let us know about Hit Pig, a new animated feature based on the book Pete and Pickles by Bloom County creator Berkeley Breathed. The film version stars the voices of Peter Dinklage (Game of Thrones) and Lilly Singh (A Little Late With Lilly Singh). “Set in a futuristic cyberpunk world, the film stars Hitpig (Dinklage) as a grizzled porcine bounty hunter who accepts his next hit: Pickles (Singh), a naive, ebullient elephant who has escaped the clutches of an evil trillionaire. Though Hitpig initially sets out to capture the perky pachyderm, the unlikely pair find themselves on an unexpected adventure criss-crossing the globe that brings out the best in both of them.” And hey, if all goes well it looks like we’ll be seeing a lot more interesting anthro features coming out of the production company, Aniventure. “The London-based animation production studio is in production on Riverdance: The Animated Adventure based on the stage show phenomenon of the same name, and Blazing Samurai, based on Mel Brooks’ classic Blazing Saddles and directed by Mark Koetsier (The Grinch) and overseen and produced by Rob Minkoff (The Lion King). Riverdance: The Animated Adventure, Blazing Samurai and Hitpig will be delivered in 2020, 2021 and 2022, respectively.” Here’s hoping. 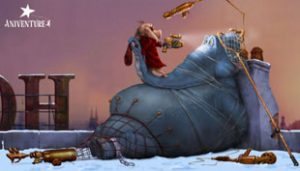