Oh Blimey, Oh Goody, Back in your Neighborhood-y

This has been flying around the Internet all day: Following the re-boot of Animaniacs, it’s time for a reboot of Tiny Toons. Here’s what Animation Scoop had to say: “HBO Max and Cartoon Network are returning to Acme Acres with a series order for Tiny Toons Looniversity, an all-new half hour animated comedy series featuring characters from the Emmy Award-Winning Tiny Toon Adventures from Warner Bros. Animation (WBA) and Amblin Television.  Steven Spielberg will return as executive producer…  Erin Gibson (Throwing Shade podcast) will serve as showrunner and co-executive producer. Nate Cash (Adventure Time) is also on board as co-executive producer. Babs, Buster Bunny and the rest of the gang follow their comedic ambitions all the way to Acme Looniversity, the esteemed institution of higher hijinx learning, where young dreamers become professional toons. Here they form long-lasting friendships with one another and perfect their cartoony craft while studying under the greatest cartoon characters in history, the Looney Tunes.” No word yet on a planned release date, but with more and more animation coming down the pipe these days, it shouldn’t be long. 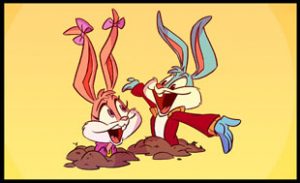