Play to Hold You Over

Sad news: It seems that the next book in Katie O’Neill’s popular Tea Dragon series, The Tea Dragon Tapestry, has been delayed several months due to problems with the printing (??). It’s now set for the middle of 2021. In the meantime though, we’re hoping that Oni Press has an easier time with Autumn Harvest, a new card game based on the Tea Dragon series that’s been created by Renegade Game Studios. “Explore the secrets of Tea Dragon care-taking in this enchanting game of friendship and fantasy! Collect Growth tokens and cards to create memories with your Tea Dragon in this light deck-building card game.” This one’s scheduled to be released any day now. 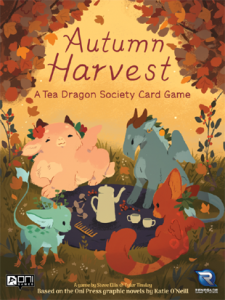