Return of the Big Red Dog

How could something that large sneak up on us? Well, here we go: Clifford the Big Red Dog is coming back soon in a new live action/CGI movie from Paramount Pictures and Walden Media. “As Emily Elizabeth (Darby Camp) struggles to fit in at home and at school, she discovers a small red puppy who is destined to become her best friend. When Clifford magically undergoes one heck of a growth spurt, becomes a gigantic dog, and attracts the attention of a genetics company, Emily and her Uncle Casey (Jack Whitehall) have to fight the forces of greed as they go on the run across New York City.” Before all that though, Scholastic is bringing us Clifford The Big Red Dog: The Movie as a graphic novel, written by Georgia Ball and illustrated by Chi Ngo. According to Wikipedia, the project has actually been in development since 2016, but now both graphic novel and movie are scheduled for release in the later part of 2021. 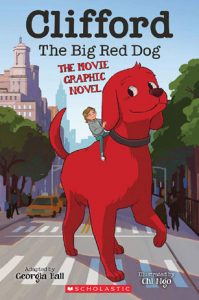