News from Animation World Network that Zodiac Kids (part of Banijay Studios in California) will be producing a new Mumfie animated series for markets in Europe. “Mumfie is a preschool comedy series based on Magic Adventures of Mumfie by Britt Allcroft (creator of Thomas & Friends and the film Thomas & The Magic Railroad). Told with heart and humor, the brand-new series features the optimistic young elephant Mumfie, who along with his best friends, Pinky the flying pig and Jelly Bean the color-changing jellyfish, are the helpful heroes of this whimsical series. As our trio embark on their daily adventures you’ll get to meet their eclectic bunch of animal friends: A cheeky crocodile who thinks he’s a king and his mischievous cat confidant; there’s a hermit crab mayor and a giraffe who runs a hotel on an iceberg; you’ll see a jolly yellow whale and a skateboarding zebra, as well as some pirate wolves and a Greek chorus of funny frogs. In this world, nothing is quite what it seems and no matter what challenges arise, no flop, failure or fiasco is unfixable for Mumfie and his friends.” As is typical for such properties, there’s no word on if this new series will be distributed in North America, but with the Internet anything is possible. 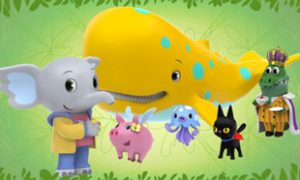