More news from Animation World Network, this time featuring a well-known celebrity. “Iervolino Entertainment has debuted the first images from its new animated series Puffins, revealing the character ‘Johnny Puff,’ who is being voiced by star Johnny Depp. The mobile-first, short-form project was announced in June and is now in production… Puffins follows the adventures of a group of cute little birds, who work for the wily walrus Otto. The main characters of the series are five puffins: Johnny Puff, Tic and Tac, Didi and Pie. They live with a tribe of puffins in the vast and technological realm of Tana. The stories in the series will range from the bold missions of Otto, to multiple situations related to the small, fun problems of everyday life, addressing the issues of social impact in a childish way.” Now let’s see if this one winds up available in North America. [Thanks for reading — and a Happy Thanksgiving to you and your family, from ye humble ed-otter.] 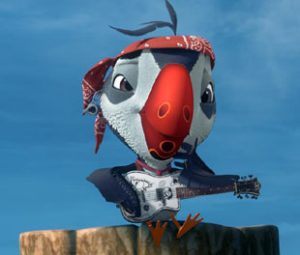