Cats and the City

The Cats of Ostia Antica sounds like quite an ordinary title perhaps, but this new full-color dialogue-free graphic novel is anything but ordinary. Scripted and illustrated by Julian Brier, this hardcover book is available now from Tinto Press. “The sun sets on a seemingly normal day over the ruins of the ancient roman city of Ostia Antica. The groundskeeper tends to his duties and is kept company by the cats that inhabit the nooks and shadows of the historical site. What was once a seemingly normal dinner after work for the groundskeeper takes a turn when he loses consciousness and finds himself in a slightly skewed reality. Led by one of his feline friends, he finds himself back at the gates of Ostia Antica and what lies beyond is a resurrected city full of ghosts and ghouls of every kind, beckoning for him to join the party.” Solrad.co has a preview of several pages, which should give you a better idea what you’re in for. 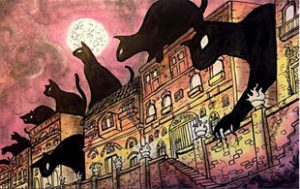