As we celebrate the 4-year anniversary of the original film’s release, thanks to Animation World Network we’re learning more about the plot of Sing 2, coming to us next December from Illumination. “In Sing 2, can-do koala Buster Moon and his all-star cast of animal performers prepare to launch their most dazzling stage extravaganza yet… in the glittering entertainment capital of the world. There’s just one hitch: They first must to persuade the world’s most reclusive rock star — played by legendary music icon Bono, making his animated film debut — to join them. Buster and his cast have turned the New Moon Theater into a local hit, but Buster has his eyes on a bigger prize: Debuting a new show at the Crystal Tower Theater in glamorous Redshore City.” Check out the article for more details. [And of course, have a Safe and Merry Christmas, everyone!] 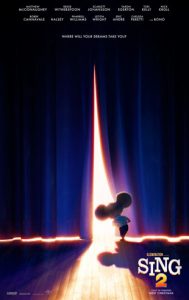