Dark comedy gets dark with Julian In Purgatory, a new black & white funny-animal graphic novel written and illustrated by Jon Allen. This is from Kirkus Reviews: “Julian (an anthropomorphized cat) is the son of a former two-term mayor, wearer of expensive shirts, and addict of his coffee-table drug buffet. After his levelheaded girlfriend kicks him out, Julian dredges his list of next-best friends hoping to find money, new digs, and someone who will understand why the world is against him. Though he hates his haters, he can’t help but think that maybe there’s some truth to what they’re saying. Julian’s interpretation of lemons to lemonade: steal a bag of drugs from his dealer and try to make a financial go of it without getting caught. Except he does.” Available this February in trade paperback from Iron Circus Comics. 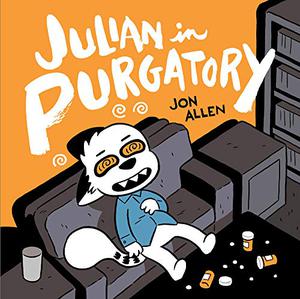