Got a Snail of Tale to Tell Ya, Lads

Max Lang and Magic Light Pictures made a name for themselves more than ten years ago with an animated adaptation of Julia Donaldson’s picture book The Gruffalo. (Soon after, we and everyone else were talking about the film!) Well nothing breeds success like success, so now Magic Light is back with a new stop-motion/CGI adaptation of the author’s 2003 book The Snail and the Whale. “The film’s remarkably realistic and vibrant animation begins with a tiny peach-colored snail who longs to journey outside the confines of her seaport-adjacent rock home and see the depths of the sea and vastness of the wide world. Writing a note on her rock in glistening snail slime that she’s looking to hitch a ride around the world, the snail is visited by a large humpback whale who offers her a ride on his tail for the adventure of a lifetime. As the snail and the whale encounter warm beachside sunsets, brisk mountain ranges, rainbow reefs as well as dangerous storms and sinister sharks, the snail has an existential awakening about her place in the world and wonders what her purpose could be as a small creature on such a large planet.” Animation World Network has a whole lot more, including previews and a look behind the scenes. 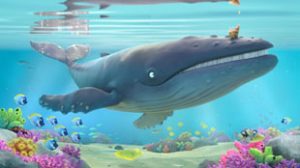