Ponies Coming Right Into Your Home

Well, some information is better than none, it seems. Animation World Network has an update (at least a little) on this “mysterious” My Little Pony: Friendship Is Magic second feature film we’ve been hearing about. “My Little Pony fans will be able to keep their cutie marks parked at home for the Mane Six’s next, as-yet untitled animated feature frolic. Previously slated for theatrical release September 24 through Paramount Pictures, the eOne/Boulder Media project has been hitched up by Netflix for global distribution — excluding China, which is covered by Hasbro’s eOne. A release date has not been revealed. Little has been announced about the new MLP movie, which will once again be based on the smash hit Friendship Is Magic reboot created by Lauren Faust. The film is being directed by Emmy-nominated comedy writer Robb Cullen — co-creator/director/writer of the Spike adult toon Gary the Rat, starring Kelsey Grammer — and kids’ TV animation writer-director José Luis Ucha (Invizimals, Angus & Cheryl, Bernard), with Mark Fattibene (CG supervisor, Monsters vs. Aliens, Kung Fu Panda). Trust us, you’ll know more as soon as we do! 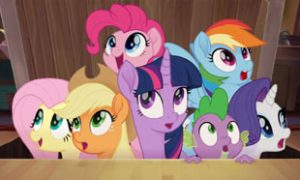