A Trio for Snowy Days

We just found out about three upcoming animated specials — all of which have some definite Furry interest in them. “Entertainment company TeamTO has acquired the TV, film, and licensing rights to three popular children’s books: Snowman (Snowy and the Snowman), by Jacques Duquennoy; Fox’s Garden (The Winter I Met the Fox), by Camille Garoche; and Something’s Fishy  (Penguin’s Ice Time) by Jean Gouronas. The three winter-themed stories will be produced as individual specials for the 2022/2023 holiday season… In The Winter I Met The Fox, directed by Emma Carré, a fox finds refuge from a cold and snowy evening in a greenhouse. Shy little Sacha overcomes his fears and comes to the rescue with Chickpea, a pet chicken. He is amazed to find that the Fox had babies and learns that friendship is about reaching out. Directed by Lois Espuche, Penguin’s Ice Time follows Penguin as he is ice fishing, but the fish aren’t biting. But why? A comedic cast of polar characters gather, chatter, wager guess and generally, aggravate Penguin until…they hear something below the ice! Snowy and The Snowman, directed by Sif Perlt Savery, stars Snowy, a young snowgirl living in Snowland with her elf parents. On her first day of hockey practice Snowy’s dream of flying like a superhero Snowman comes true as she rescues a little rabbit from a mighty Yeti.” Once again we have Animation World Network to thank for the news. Keep an ear open for release dates next year. 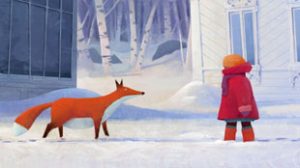