Teddy is Back to Save You

Okay here’s something different: A new movie, heading to Netflix, based on a single illustration. Slashfilm explains: “Back in 2013, word arrived that Dwayne “The Rock” Johnson was going to make a movie based on a single drawing that appeared on DeviantArt. That’s right: Not an adaptation of a story, but a drawing… a piece called ‘Sweet Halloween Dreams’ by artist Alex Panagopoulos. The project seemed to vanish as quickly as it was announced, but now it’s back – and headed to Netflix. Johnson will produce the film, now titled Teddy and the Guardians of the Night, with Dany Garcia under their Seven Bucks Productions banner.” No word yet on a planned release date, or even any more details on the plot, but many people are making guesses based on the illustration below. We’ll let you know more when we do. Pleasant dreams! 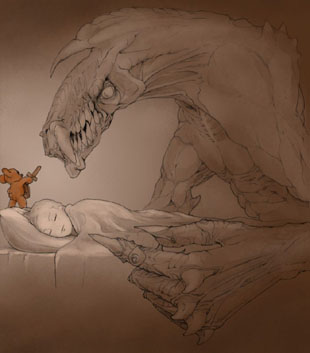