The Horse. The Girl. The Story Continues.

Like many studios, Dreamworks is itching to get back into the theatrical game, according to Animation World Network: “Isabela Merced, Julianne Moore, Jake Gyllenhaal, Marsai Martin, Mckenna Grace, Andre Braugher, Walton Goggins, and Eiza González have joined the cast of DreamWorks Animation’s Spirit Untamed, the next chapter in the studio franchise that began with the 2002 Oscar-nominated film Spirit: Stallion of Cimarron and includes an Emmy-winning TV series. Universal is releasing the film in theatres on June 4, 2021. Spirit Untamed tells the story of a headstrong girl longing for a place to belong who discovers a kindred spirit when her life intersects with a wild horse. The film is directed by Elaine Bogan (Trollhunters: Tales of Arcadia) and produced by Karen Foster (How to Train Your Dragon).” See you this summer, pardner. 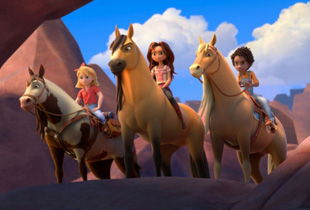