Look what they’re getting over in Italy! It’s a new 2D animated series designed to teach kids about ocean conservation (while they’re busy being entertained). “Based on an original concept by exec producer Federico Fiecconi (Founder & CEO, Graffiti Creative), AquaTeam-Sea Adventure follows world-famous marine biologist Marysun as she sets out with her friends Otty the Octopus (a whole rap group on eight legs) and teenage diving enthusiast Desy to explore the beautiful Mediterranean sea. As well as befriending dolphins, turtles and other sea creatures, the adventurers discover a deposit of plastic garbage which threatens a pod of sperm whales.” Animation magazine has all the details. 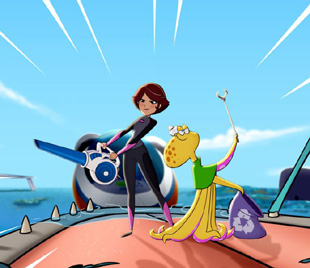