Cartoon Brew pointed us at something we had not heard of. Thanks! “Inspector Sun and the Curse of the Black Widow, a family-oriented animated thriller from Spain, has entered production… Set in a world where humans and insects co-exist, the story unfolds on a seaplane journey from Shanghai to San Francisco in the 1930s. It centers on the spider detective Inspector Sun and his nemesis the Red Locust, paying homage to the detective stories of Agatha Christie and the fictional Charlie Chan. The script, by Rocco Pucillo, won the prestigious students-only Samuel Goldwyn Award in 2013. The film is a co-production from The Thinklab Media and Gordon Box. It is directed by Julio Soto Gúrpide, who helmed the Goya-nominated 2017 feature Deep.” Currently Inspector Sun is set for release in the summer of 2022. We’ll certainly find out. 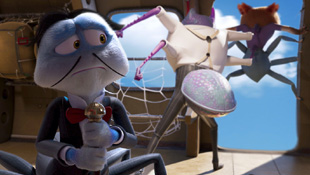