Luck Be A Dragon Tonight

We’re also learning more about Luck, the new CGI animated feature that’s coming from Paramount Pictures and Skydance Animation. It was previously announced that Jane Fonda would be in the cast, and now it turns out Whoopi Goldberg is lending her voice too. According to Animation World Network: “Goldberg will provide the voice for ‘The Captain’, the tough-as-nails Head of Security for the Land of Good Luck,” while Fonda “…will voice ‘The Dragon’, the exuberant CEO of Good Luck and undisputed luckiest ancient being in all the land.” They go on to say this: “Directed by Peggy Holmes (Secret of the Wings, The Pirate Fairy) and written by Kiel Murray (Cars, Cars 3), Luck centers around the unluckiest girl in the world, who after stumbling upon the never-before-seen world of good and bad luck, must join together with magical creatures to uncover a force more powerful than even luck itself.” The article goes on to detail several other animated projects that Skydance have in the works.  Luck is scheduled for release by Apple TV+ in February of 2022. 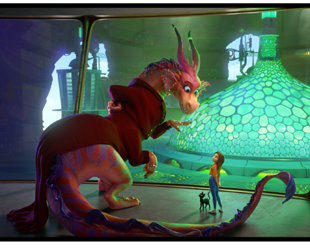