Goodbye to Ponies… and Hello Ponies

Things have been changing rapidly in the world of My Little Pony since Friendship Is Magic ended its TV run in 2019. Now comes the news from IDW Publishing that the comic book tie-in to MLP-FIM is coming to a close very soon… while at the same time, they announced what’s coming next. “Since its very inception in 2012, the My Little Pony: Friendship is Magic monthly comic book series from IDW has captured the hearts and minds of filly fans everywhere. Now, after almost a decade of publication, we bid a fond farewell to Friendship is Magic with September’s issue #102, the oversized conclusion of the official ‘Season 10’ storyline that picked up where the beloved animated series left off… But friends, never fear! Twilight Sparkle, Pinkie Pie, Applejack, Fluttershy, Rainbow Dash, and Rarity will return in a new series beginning in October: My Little Pony: Generations! Written by Casey Gilly and illustrated by Michela Cacciatore, the new five-issue miniseries will see the Ponies of two separate generations collide, as the familiar faces from Friendship is Magic must call upon the original G1 Ponies of the 1980s for help against a new witch threat erupting from the Volcano of Doom!” So, will this go beyond five issues? We’ll find out soon. 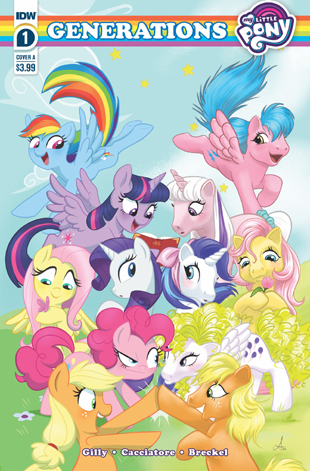