Netflix continues to present us with animation that is at very least worth checking out. The latest is called Dogs in Space. “In this animated comedy adventure, in the not-so-distant future genetically enhanced dogs are sent across the universe in search of a new home for the human race. It’s a giant cosmic game of fetch, as the canines seek a planet that will save humanity and — more importantly — let them return to their beloved owners… The series is created by Jeremiah Cortez, who is also executive producer alongside Adam Henry. The voice cast includes Haley Joel Osment (Kominsky Method), Sarah Chalke, Kimiko Glenn (Into the Spider-Verse), Chris Parnell (Archer), David Lopez, Debra Wilson (MADtv), and William Jackson Harper.” According to Animation World Network, Dogs in Space is due on Netflix this fall. 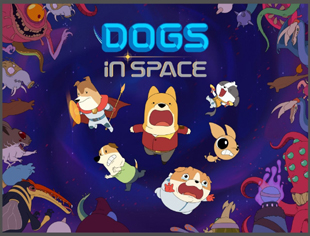